There are a few things I really like. My family get first priority, but beer and Warhammer are close behind. This army was an attempt to combine the two: Orcs, plus beer. This army has become my signature one, and if I'm playing a game just for fun, this is likely the one I'm going to use. I liked it enough that I named this blog after it! 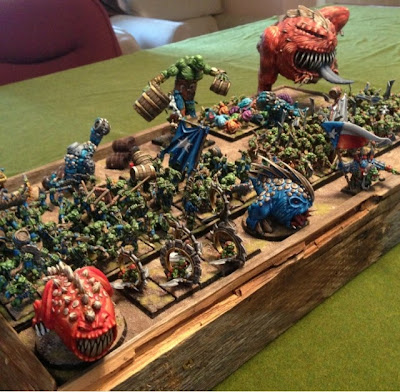 As usual, more after the jump...


I had great success with it at the GT scene; finished second overall with it at Quake City Rumble 2012, and Bayou Battles 2012. It picked up three Player's Choice awards (Alamo 2012, Bayou Battles 2012, and Lone Wolf 2012) and one Second Player's Choice (QCR 2012, behind Chris Watson). It also picked up Best Painted at Lone Wolf, the Alamo, and QCR.

The army runs with a Savage Orc Warboss, Savage Great Shaman, Savage Shaman (sometimes replaced with a Goblin Shaman on a wolf), a Savage BSB, a block of 40-50 Savage Orcs, another block of 40-50 Savage Big 'Uns, two doom divers, 5-6 wolf riders, 2 Mangler Squigs, and 2 single trolls. Depending on the venue, I'll sometimes drop my block sizes to add a squad of 20 squigs. Finally, I interchange either a Giant and Rock Lobba, or a Arachnarok Squig. 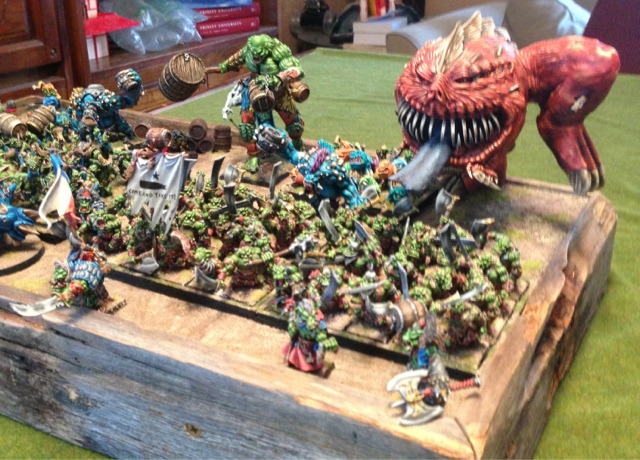 The Arachnarok Squig was a very simple sculpt - a ball of styrofoam, with two styrofoam legs, all coated in milliput and then sculpted. He'll get a model showcase on the blog at some point, so I'll go more into his process then. I was initially worried that people would be confused about what the model was, since it has no goblin riders and the Forgeworld Colossal Squig came out almost immediately after I sculpted him, but he ran at three tournaments and I never had a problem with it. The Big 'Uns are Rackham Orc Brutes. Their banner is the infamous "Come and Take It" flag from the Texian army; all the banners in this army are historical flags of the State/Nation of Texas. 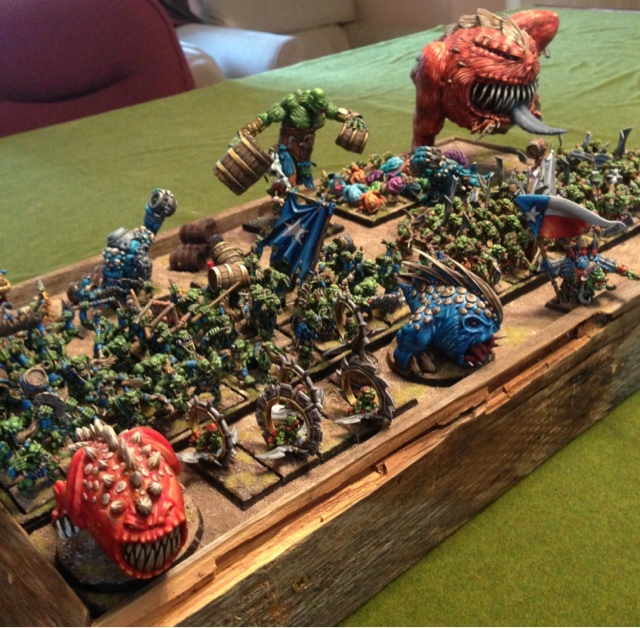 The Wolf Riders are Goblin Mad Wheels from Rackham. It took me eight months to find six of them, but I was able to find one of the unreleased spike-and-bar prototypes that is far from common. I justified the alternative models by claiming their wolves were impounded for riding while intoxicated.
The Mangler Squigs are both custom sculpted. I was so disappointed by the GW Mangler Squig model that I ended up making my own. These were the first completely scratch-built models I'd made, and I was so pleased with them that it gave me the confidence to make the Arachnarok Squig. 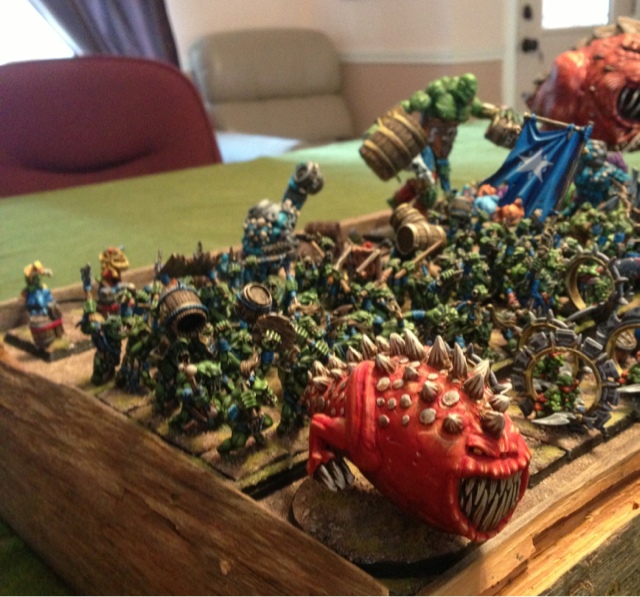 Here's a better shot of Stompy, the red Mangler. Amusing, in games, he's usually an inch faster than his bluer cousin Chompy. Anyone who's played 3rd edition 40k will know why that works.
The Savage Orcs behind are extensively converted to be drinking beer. Their banner is the Gonzalez Flag, which was once proposed as the national flag of Texas. 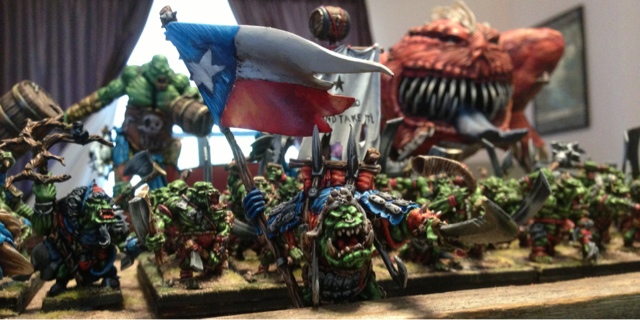 The BSB is a Rackham Confrontation Grakka Kamahru, with the GW orc BSB banner glued on. It's (obviously) painted as the flag of Texas, because it's the best flag there is. To his right, you can see the Savage Orc shaman, who is Rackham's Tumahk, voice of the wind. 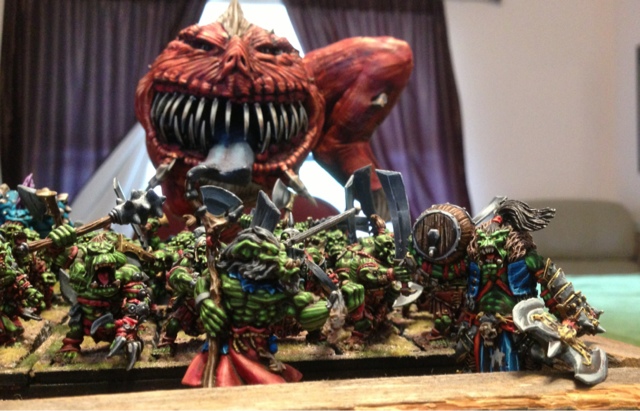 The Savage Orc Great Shaman is a Reaper orc shaman that I picked up a long time ago. The Warboss is a Warmachine model converted with a Reaper orc head, and the orc warboss axe. The musculature on his chest is all done with painting, as there's not a lot of muscle detail on the model's tummy.

A lower view of the army, showing off the Mangler squigs. 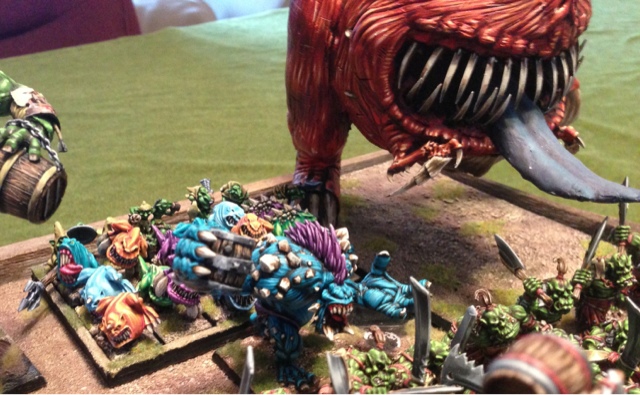 The squig herd and one of the trolls. I went with Privateer Press models for my trolls, because I felt the face of the Dire Troll Mauler was a close hybrid of what a squig and an orc might look like if they reproduced. The fact that the Bomber came with a pair of kegs that could be shared between the two with an easy arm-swap was an added bonus. I originally intended to paint them green to match the orcs, but when I went with pastel shades for the squigs, I decided to go turquoise with them. I was very pleased with the results.
Behind him is my pastel squigs. I usually deploy them with the joke, "In Soviet Russia, rainbow taste you!" 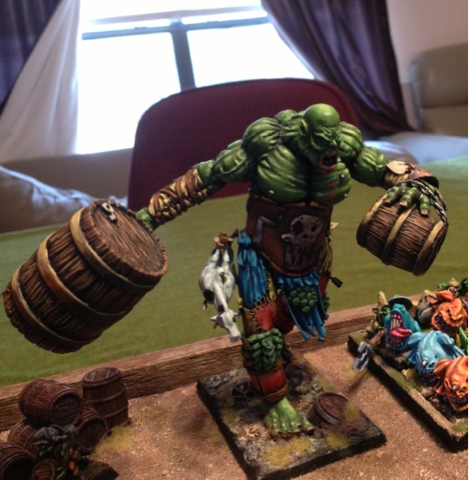 Davey Stomp-it, a Giant conversion I first posted on Dakka seven years ago. I swapped his club for a giant, Gallagher-style mallet because I had the bit sitting around, and it fit the theme. He got a repaint from his initial 2006 paint job, because I learned how to paint in the interim. 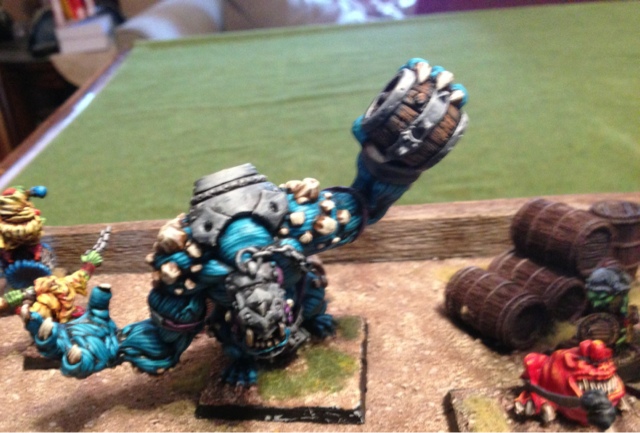 The other single troll, Privater Press's metal Dire Troll Bomber. You can see one of my Doom Divers on the right, modeled as an Angry Squig launcher.
Posted by Ryan Smith at 11:00 AM

Ryan Smith
San Antonio, TX, United States
I'm a painter, sculptor, home brewer, and father of two. I love miniature painting, throwing dice, drinking beer, and combining the first three. I started painting miniatures in 2001, and spent three years figuring out how to do it well, leading up to my first award winning army in 2009. Since then, I have produced one award winning Warhammer army a year, usually with the help of fermented grain. I also co-host a podcast called The Beer Phase.